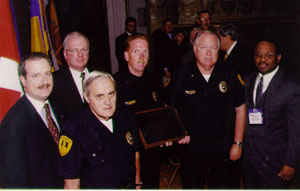 The Award for Valor is presented to an IACLEA member or employee of a member campus public safety, police or security department for an act or acts involving personal risk while acting on behalf of the campus or members of the campus community. The 2000 IACLEA Award for Valor was presented to Sergeant Don Boysen, Corporal Terry Engle and Officer Bob Johnson of Black Hawk College in Moline, Illinois.

In nominating Sgt. Boysen, Cpl. Engle and Officer Johnson, Chief Richard P. Fiems said, "It is my opinion that the quick actions of my officers saved at least one life that day. Sgt. Boysen's act of placing himself between the young man and his intended target displayed a level of courage that is truly unbelievable. He is a dedicated and professional police officer and his actions are within the best traditions of the law enforcement profession. Cpl. Engle and Officer Johnson also displayed tremendous courage and dedication to the protection of Black Hawk College and its people."

On Friday October 29, 1999 a Black Hawk College student committed suicide in parking lot #1 of the Moline (Illinois) campus after a standoff in which the three campus public safety department officers exhibited tremendous courage. The incident unfolded as follows:

At 10:30 a.m. that day a young male student came on the Moline campus in an effort to meet with his estranged girlfriend, who had filed an order of protection (OP) against him. Since both parties were students at Black Hawk College, the order did not prohibit him from coming on campus but prohibited him from coming within 200 feet of her while on campus.

When she saw his car in the parking lot, she went to a faculty office to call the campus police. Sergeant Don Boysen was in a meeting in the building she was calling from and responded to the call. He met her, planning to escort her to her car. He also notified Corporal Terry Engle and Officer Bob Johnson to start looking for the suspect in the vicinity of parking lot #1.

Cpl. Engle and Officer Johnson found the suspect walking toward his car and stopped him. They explained the order of protection to him and reminded him that he was not allowed by the court to be within 200 feet of his ex-girlfriend. The young man told the officers that he knew the conditions and was just on campus to meet with an instructor. The two officers convinced the young man to leave the campus and return after his former girlfriend had left. He got into his car and was driving out of the lot when his former girlfriend and her mother, who had come to pick her up after class, walked out of the building with Sgt. Boysen.

The young woman wanted to know why her ex-boyfriend was not under arrest. Sgt. Boysen explained the order of protection to her. Her mother started asking questions as well. While they were talking the young man, who had been driving out of the lot, turned his car around and drove directly toward his ex-girlfriend and her mother. He stopped the car and got out, shouting at his girlfriend that she had ruined his life. Sgt. Boysen walked toward the young man to keep him from moving toward his ex-girlfriend. At that time the young man reached into the back seat of his car and pulled out a 12-gauge pump shotgun.

Sgt. Boysen immediately moved from the cover position he had taken by a car and placed himself directly between the suspect and the ex-girlfriend. Sgt. Boysen continued to shout at the suspect and distracted him long enough for Cpl. Engle to remove the two women from the scene. The young man then pointed the shotgun at his own chest and started backing away from the officers. He was backed across one ramp of the parking lot and took up a position between two rows of parked cars. Officer Johnson continued to provide cover for Sgt. Boysen. Cpl. Engle began to clear students from the parking lot and radioed the Moline Police Department for assistance.

Sgt. Boysen continued to talk with the young man for the next 20 to 25 minutes. Trained negotiators from the Moline Police eventually were introduced to the scene and took over the contact with the suspect. Approximately 90 minutes after the Moline PD negotiators began talking to the young man, he ended the standoff by placing the shotgun against his forehead and pulling the trigger.

The investigation of the incident revealed that the young man had quit his job the day before and had been up all night writing a nine-page suicide note. At one point in the note he said, "The only thing left is murder-suicide."