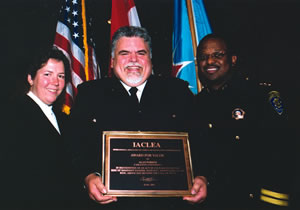 On November 14, 2002 , at approximately 0230h, Campus Safety Officers Justine Cain and Stephen Webster and Shift Manager Alan Parker were observing traffic and performing crowd control functions in Parking Lot 2. The bar had just closed an patrons had begun to leave Oliver’s Pub and Patio and make their way to the parking lot to find a way home. Blue Line Taxis were on strike and many patrons had failed to make alternative arrangements to get home. The number of patrons just hanging around was considerable and during this time an altercation started between two mail individuals following their exit from the bar. The main aggressor in this incident fled the scene after “sucker” punching the other in the head.

This report was turned over to the Ottawa Police Service for investigation and was assigned to a detective. Inquiries by Department of University Safety continued on campus for over a year in the attempt to identify and determine if any of the suspects involved in this incident were university students. This past November (2003), information was received during the course of an unrelated on-campus investigation from a female that a Lebanese mail from the Hintonberg are, known to her only by his nickname, could be the suspect sought for the attempted assault with the knife in November 2002. The female alleged that the male is currently missing two of his front teeth and has a scar above his lip. The said male has apparently stated that he received the injury as a result of being hit by one of the Carleton Safety Officers outside Oliver’s Pub and Patio last November. The investigation continues and this information has bee passed on to the Ottawa Police Service officers covering the Hintonberg area in the City of Ottawa.

As part of the investigation, a university committee was established to study and make recommendations that would prevent further assaultive incidents during and following Oliver’s Pub and Patio hours on campus. The committee included representation from the Department of University Safety, Dean of Students’ Office, University Secretary, Purchasing Services, Oliver’s Pub and Patio manager, and the Carleton University Students Association. The outcome from this committee was the development of an alcohol policy for student events that now identifies and records the names of all patrons entering licensed events and requires non-student attendees to be signed in by a university student with a limit of one guest per student.

If not for Shift Manage Alan Parker’s quick reflexes and calm thinking on that evening, there is no doubt that the individual that was the intended victim of this suspect would have been seriously injured or even killed. There also existed the potential that after wounding or killing his intended victim, the suspect could have turned his knife on Campus Officer Cain or Shift Manager Parker. Shift Manager Parker even when grossly out-numbered, did not hesitate a moment to put his life in danger to protect the life of the student and his fellow officer, Campus Safety Officer Cain.