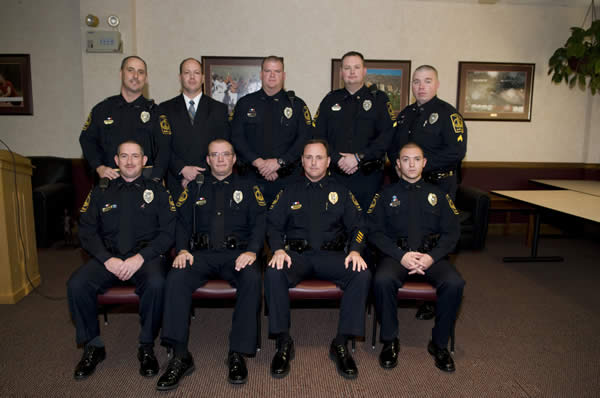 On the morning of April 16, 2007 a horrific and devastating tragedy occurred on the campus of Virginia Tech. An armed gunman entered Norris Hall and opened fire on students, faculty and staff. Officers from the Virginia Tech Police Department were the first to respond to the shooting and placed their lives in extreme peril.

Officer Dean Lucas was the first patrol unit on scene and advanced to the building while shots were being fired inside. Officer Lucas breached a locked doorway and entered the building with other first responders and advanced toward the sound of shots being fired. His actions provided an entry point for the other first responders and enabled the multi-officer response inside the building. Lieutenant Curtis Cook responded to Norris Hall as team leader for the Emergency Response Team while shots were still being fired and remained calm while providing information to Communications and other officers. Lieutenant Cook along with the other members of the Virginia Tech Police Department including Officer Geoffrey Allen, Sergeant Thomas Gallemore, Detective Daniel Hardy, Officer Jaret Reece, Sergeant Sean Smith, Officer Keith Weaver, and Officer Larry Wooddell entered Norris Hall and advanced toward the sound gunfire coming from the second floor. The officers began searching for the gunman and entered room 211 with the knowledge that the gunman was still inside but without knowing if he was alive or dead. Once the gunman was located and down these officers began to assist those who were injured and worked to evacuate victims from Norris Hall to safety and medical attention.

All these officers knowingly placed their lives in extreme peril; under extreme conditions, and advanced toward imminent danger and faced an unknown risk, in an attempt to save the lives of others without regard for their individual safety and well being. Without a doubt, their unselfish actions on April 16, 2007 saved countless lives.

The team from the Virginia Tech Police Department was nominated by Chief Wendell R. Flinchum.