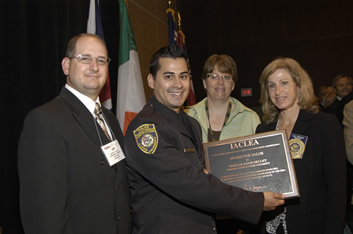 On the evening of January 28th, 2009, Officer David DeClet was patrolling his assigned patrol beat as a Police Officer and Field Training Officer with his police recruit. At approximately 1940 hours, Officer DeClet responded to a call of possible gang related gunfire at a city sidewalk location just outside the campus. As the first responder, arriving almost immediately, Officer DeClet was skillfully and efficiently able to assess the scene and ensure that he and his recruit were safe from gang crossfire. He was then able to locate a 15 year old victim who had sustained a single gunshot wound, from the eight rounds that had been fired. Officer DeClet was able to render immediate medical assistance until the arrival of Chicago Fire Department paramedics. The victim was transported to the hospital where he was admitted in stable condition. Officer DeClet remained on scene to ensure crime scene integrity until the Chicago Police Department took over the scene. On this January evening, Officer DeClet put himself at risk to help another. This incident is just one out of many situations where Officer DeClet has performed his duties above and beyond the call of duty. He routinely exhibits a high level of job performance that sets the standard for excellence in service and selflessness for other department members to emulate. Officer DeClet was nominated by Chief of Police James C. Lyon, Jr.