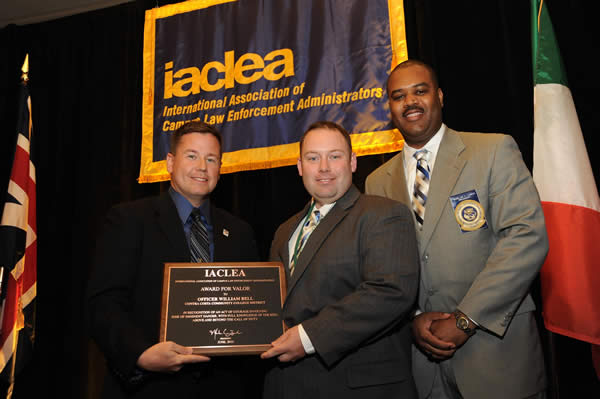 On October 2, 2009 a male suspect received a ride to Los Medanos College from his co-worker. During their ride, the suspect revealed a semi-automatic pistol to the co-worker, telling him that he was heading to the college to commit suicide, and in the process he was going to "get creative" on the college campus. After dropping the suspect off at the college, the witness immediately contacted campus police.

Officer William Bell contacted the witness minutes later and got a quick description of the suspect. He then proceeded back to the Los Medanos College Campus. As Officer Bell re-entered the campus, he immediately located the suspect based on the witness’ description. Officer Bell radioed Pittsburg Police for cover, and took down the suspect at gun point. The suspect was found in possession of a loaded 9mm semi-automatic pistol, as well as a large folding knife. He was later charged for possession of dangerous weapons on a college campus, as well as possession of a firearm on a college campus.

Officer Bell's quick thinking and decisive action prevented what could have been a terrible tragedy. Officer Bell put the needs of the community before himself, and in doing so most likely saved the lives of the suspect, as well as innocent students and staff. Officer Bell was nominated by Lieutenant Chad Wehrmeister.