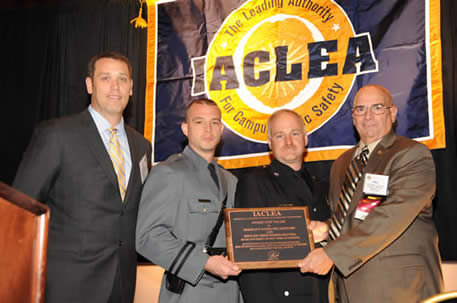 On the evening of Nov. 10, 2011, Leonard and Skovira responded to a report that a car had plunged into the pond near the Hunt College Union.

After hearing pounding from inside the sinking car, Leonard took off his gun belt, protective vest, and boots and and grabbed a floatation device and his baton. He jumped into the pond and swam to where he could just make out the car. Upon seeing the individual was running out of air and starting to have water enter his mouth, Leonard busted out the back window with his ASP and pulled out the 81 year old man from the car.

While Leonard was in the water, Skovira untangled the rope attached to the flotation device and pulled the pair to safety.

Leonard experienced severe hypothermia from being in the near-freezing water. He was treated at the scene by the Oneonta Fire Department and taken to A.O. Fox Hospital, where he spent several hours recovering. The victim was also treated for hypothermia.

Sergeant Leonard graduated from the State University of New York College at Brockport with a bachelor’s degree in criminal justice in 1998. In September of 1998 he was hired by the New York State University Police Department at Oneonta. He received his certification as a police instructor in 2001 and became highly involved with instructing at police academies. Sgt. Leonard teaches various topics including, defensive tactics, ASP tactical baton, pepper spray, and several other subjects.

Sergeant Leonard has the privilege of being a certified Rape Aggression Defense Instructor for women and a radKids Self Defense and Self Awareness Instructor for children. In 2007 he was appointed as the assistant director of the Otsego County Law Enforcement Academy. He continues to instruct in the academy in addition to his administrative duties and normal road patrol duties.

Officer Skovira started with the State University of New York at Oneonta in June 2006. He is a campus public safety officer, whose duties include: dispatching for the university police, parking enforcement and services, and fire safety. He serves as the department’s warrant control officer as well as being a field training officer and also as an instructor for the National Safety Council Defensive Driving Course for the past five years.