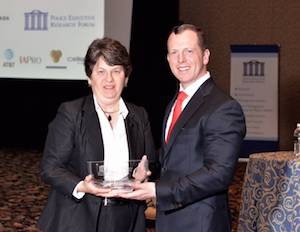 The PERF Leadership Award is presented annually to individuals who have made outstanding contributions to the field of law enforcement and who exemplify the highest principles and standards of true leaders in policing on a national level. The award recognizes innovators whose efforts serve as a model to the law enforcement community and whose vision of policing can be applied on a wide scale.

"The Police Executive Research Forum is one of the most influential organizations in American policing," said Riseling. "There are so many great law enforcement leaders within its current membership and among the previous Leadership Award winners. I am truly humbled to be recognized with this extraordinary honor."

PERF Executive Director Chuck Wexler recognized Riseling's forward- thinking strategic approach to public safety. "Throughout her career, Chief Riseling has always been on the cutting edge of training her officers to handle the critical issues in policing," Wexler said.

Referencing her transition to IACLEA, Wexler said, "We're all fortunate that she will still be an active leader in the profession, as we all have more to learn from her wisdom and experience."

Riseling was the police chief at the University of Wisconsin-Madison for 25 years before becoming IACLEA's first full-time executive director in August 2016. At UW she emphasized training for mass shooting incidents and disaster-prevention strategies. As one of the nation's recognized experts on sexual assault, she prioritized improving the campus police response to sexual assault; additionally, she implemented up-to-date practices on use of force and responding to alcohol and substance abuse.

Riseling managed the public safety response to the mass protests in Madison, Wisconsin, as a result of Gov. Scott Walker's budget bill in 2011. Hundreds of thousands of people occupied the state capitol for more than a month. Riseling commanded the multi-agency response to the protests and wrote a book about it: A View from the Interior: Policing the Protests at the Wisconsin State Capitol.