It’s that time of year again! The nominations period for Board of Directors candidates is now open.

As part of this process, IACLEA strives to infuse the Association with new leadership while simultaneously maintaining continuity and insight into the Association's needs and functions.  A further goal of this process is to ensure that Board representation reflects the diversity of the membership.

Members are strongly encouraged to nominate to the Board of Directors individuals whom they would like to see in IACLEA leadership positions.  Based on your nominations, the Leadership Development Committee will finalize a slate of candidates for President-Elect, Director-At-Large, International Region Director, and Mid-America Region Director.

Who Qualifies to Run for a Board Position?

Regional Director: Candidates for the position of Regional Director shall be Institutional Representatives in good standing for a minimum of two consecutive years before being elected. Regional Directors who change their place of employment to another institution outside of the region from which they were elected will no longer be eligible to serve as the Regional Director. However, such Regional Directors shall not lose tenure as a Board member as it relates to eligibility for time served on the Board to qualify for officer positions in the Association.

All nomination submissions must be received no later than Friday, February 1, 2019. Nominations can be submitted via this nomination form. 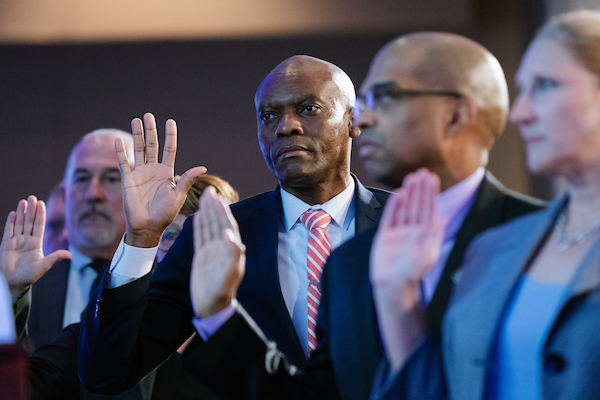 IACLEA Board of Directors gets sworn in during the Association’s Annual Business Meeting at the 2018 Annual Conference & Exposition.  © Mike Ritter