To honor the 47 campus public safety officers killed in the line of duty since 1923, IACLEA released a new Officer Memorial video. The video debuts to coincide with Police Week 2019, which takes place May 12–18. IACLEA thanks our dedicated Corporate Partner AppArmor for, once again, sponsoring the video. 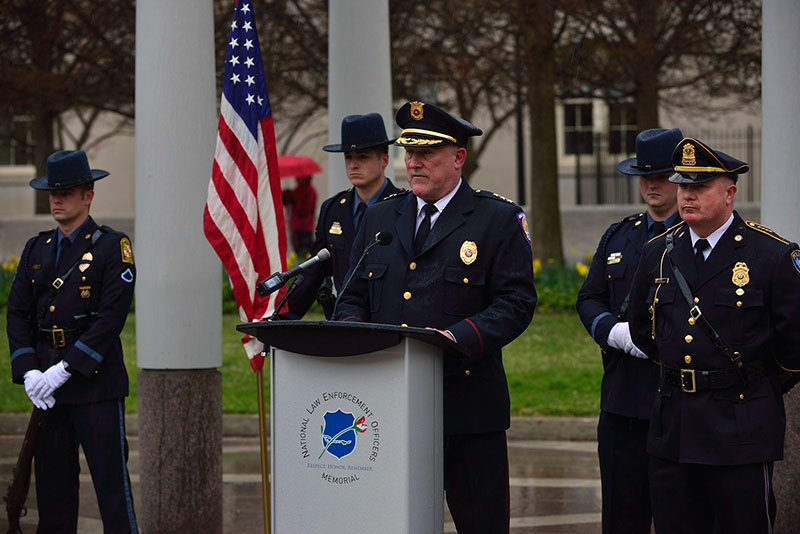 The video contains scenes from an IACLEA ceremony at the National Law Enforcement Officers Memorial (NLEOM) at which the IACLEA Board of Directors, Executive Director Sue Riseling, and then-President and CEO of the NLEOM Fund Craig Floyd honored and thanked the fallen officers. The honor guard from member institution University of Maryland Department of Public Safety added pageantry to the ceremony, as five officers presented colors.

Several officers who were slain in the past ten years are depicted in the video. Among them is Officer Sean Collier, Massachusetts Institute of Technology (MIT) Police Department, who was slain during the manhunt for the Boston Marathon bombers. As part of IACLEA’s recognition of the sacrifice campus public safety officers make, the Association is pressing to enact H.R. 816, commonly known as the “Sean Collier Act,” named for the Massachusetts officer. Because MIT is a private institution, Collier’s family was not eligible for the federal line-of-duty death benefits that families of fallen officers at public institutions receive. The Officer Sean Collier Campus Police Recognition Act of 2019, as the bill is formally known, seeks to correct that injustice.

“IACLEA is proud to honor the dedication of the heroes who gave their lives in service to their communities. We remember their families and agency colleagues who lost loved ones, partners, colleagues, friends. As we remember the fallen, I extend wishes for the safety of those currently serving at any capacity in public safety, especially our brave officers, who can be counted on at any time to respond to those in need.”

Recently there was one historical addition to the officers recognized by the NLEOM Fund. Sergeant Christopher Vidro, Montclair State University, who responded to the terrorist attack on September 11, 2001, and later died of cancer linked to the response effort, was recently added to the monument. IACLEA offers him and all other officers our ultimate appreciation for their service and heroism.

Please help remember these officers and honor their sacrifice by playing and sharing the video. Here are a few suggestions. If you have questions, please contact IACLEA Director of Communications Gwen Fitzgerald, 202-618-8277, gfitzgerald@iaclea.org.