President Vinson and New Board Members Take Oath of Office

John Vinson, PhD, assistant vice president for campus and community safety at the University of Washington-Seattle, was sworn in as IACLEA’s 62nd president during the Annual Business Meeting June 28 in Vancouver, British Columbia. His term began immediately. 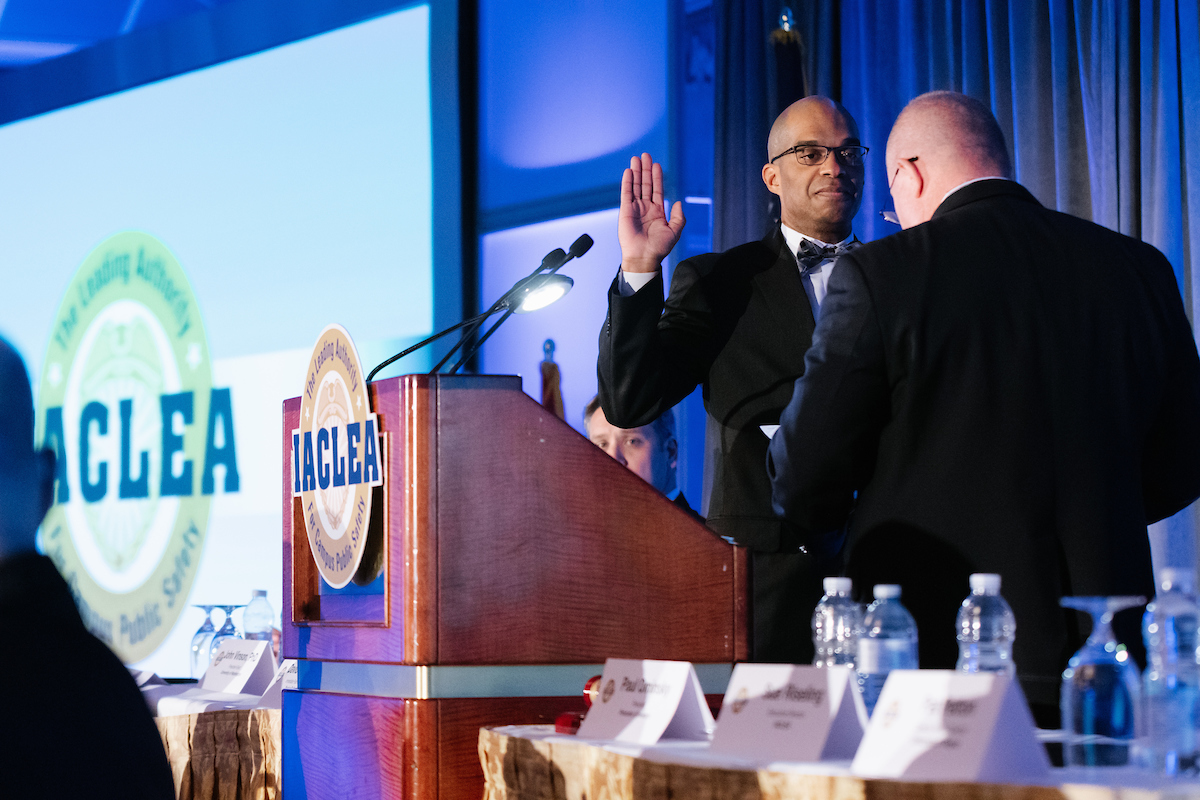 AVP Vinson weighed in on his new role: “I’m extremely humbled and honored to have been elected to serve you.  I’m looking forward to the upcoming year and all that we can do together to ensure IACLEA remains the leading authority in campus public safety.”

Hear directly from President Vinson in this brief video.

Eric Heath, formerly IACLEA’s vice president for finance, and current assistant vice president of safety and security at the University of Chicago, was sworn in as president-elect. “I am very excited about the opportunity to serve as the new president-elect and to work closely with our IACLEA Board of Directors and our fantastic IACLEA staff.  IACLEA has made great strides over the past several years in enhancing the services and resources we provide to our members. I look forward to the next three years as we execute our recently developed strategic plan in efforts to expand upon the great work that has already been accomplished,” remarked Heath on his new role.

Paul Ominsky, executive director of public safety at Princeton University (New Jersey), transitioned to immediate past president. During the Business Meeting, Ominsky expressed that serving as IACLEA president for the past year had been both a duty and privilege that he considers one of the highest professional honors of his career.

Rounding off the leadership team, David Tedjeske, director of public safety and chief of police at Villanova University (Pennsylvania), was sworn in as vice president for finance on July 3, 2019. (Due to an emergency, he was unable to travel to Vancouver.) Tedjeske shares his excitement on joining the board: “I am delighted to be back on the Board and look forward to working with so many dedicated and talented individuals. It’s an exciting time to be part of this great organization. As our membership grows, I can sense IACLEA gaining momentum and am confident that great things lie ahead.”

The officers serve in these roles for one year, ending during the 2020 Annual Business Meeting June 25, 2020, in New Orleans.

In addition to these officers, two regional directors and a director at large joined the board for the 2019–2022 term. Malcolm Dawson, BEM, was officially sworn in as IACLEA’s International Region Director. Dawson serves as the security services manager at the University of Leeds in the United Kingdom. He said, “I am truly humbled and extremely honored to be elected to the IACLEA Board of Directors. I would like to thank the executive director, president, and all Board Members for making me feel so very welcome. I look forward to the challenges ahead and working tirelessly to contribute to the ongoing success of the Association and collaborating with international members across the world.”