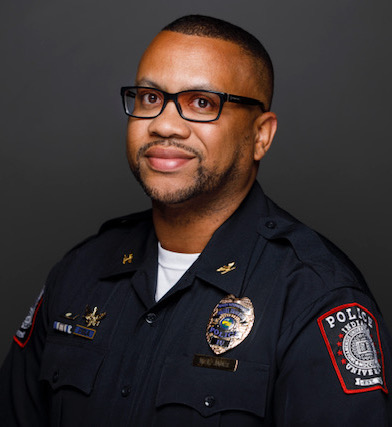 The IACLEA Board of Directors is pleased to announce that Indiana University Deputy Superintendent Wayne James will serve as Director-at-Large in place of Chief Yvonne Meyer who stepped down from the Board in November. IACLEA President John Vinson, Ph.D., appointed Superintendent James to fulfill the remainder of Chief Meyer’s current term, which concludes following the 2021 Annual Conference & Exposition in Las Vegas, NV.

Eager to serve, James notes, “I’m humbled and honored to be chosen to serve on the IACLEA Board as Director-at-Large.  I'm looking forward to assisting the organization as it evolves and working with the membership to increase effectiveness as it relates to issues and best practices that affect higher education.  I am extremely honored and looking forward to serving.”

A Gary, Indiana-native, Superintendent James rose through the ranks of area law enforcement over the last 16 years to serve as the Indiana University Police Department’s Chief of Police at IU Northwest and as IUPD’s first Chief Diversity Officer and Deputy Superintendent for Regional Law Enforcement.

Superintendent James spent his last ten years advancing at IUPD-Northwest, where he developed the law enforcement practices and strategies that make the campus one of the safest in the state. The IUPD division was recognized for its diverse workforce, which benefits the campus and surrounding area. A model of servant leadership, Superintendent James has been asked to work on the IU Bloomington campus and focus exclusively on his roles as Deputy Superintendent for Regional Law Enforcement and Chief Diversity Officer for divisions on all IU campuses.

Superintendent James has received awards and commendations for his work and taken advantage of professional development that includes the Police Executive Leadership Academy, Northwestern University School of Police Staff and Command, and a bachelor’s degree in public safety management. He also serves as an instructor, specializing in such areas as active shooter response and implicit bias training.