The IACLEA/AUCSO exchange program provides a wonderful opportunity to experience campus safety models designed around cultures inherently different from the one in which we work daily. Each year, one representative is chosen from IACLEA and one from the Association of University Chief Security Officers (AUCSO) to partner in an exchange of campus visits and information sharing about their respective campus safety operations. (AUCSO is the professional association for higher education security professionals working in the United Kingdom and Europe.) 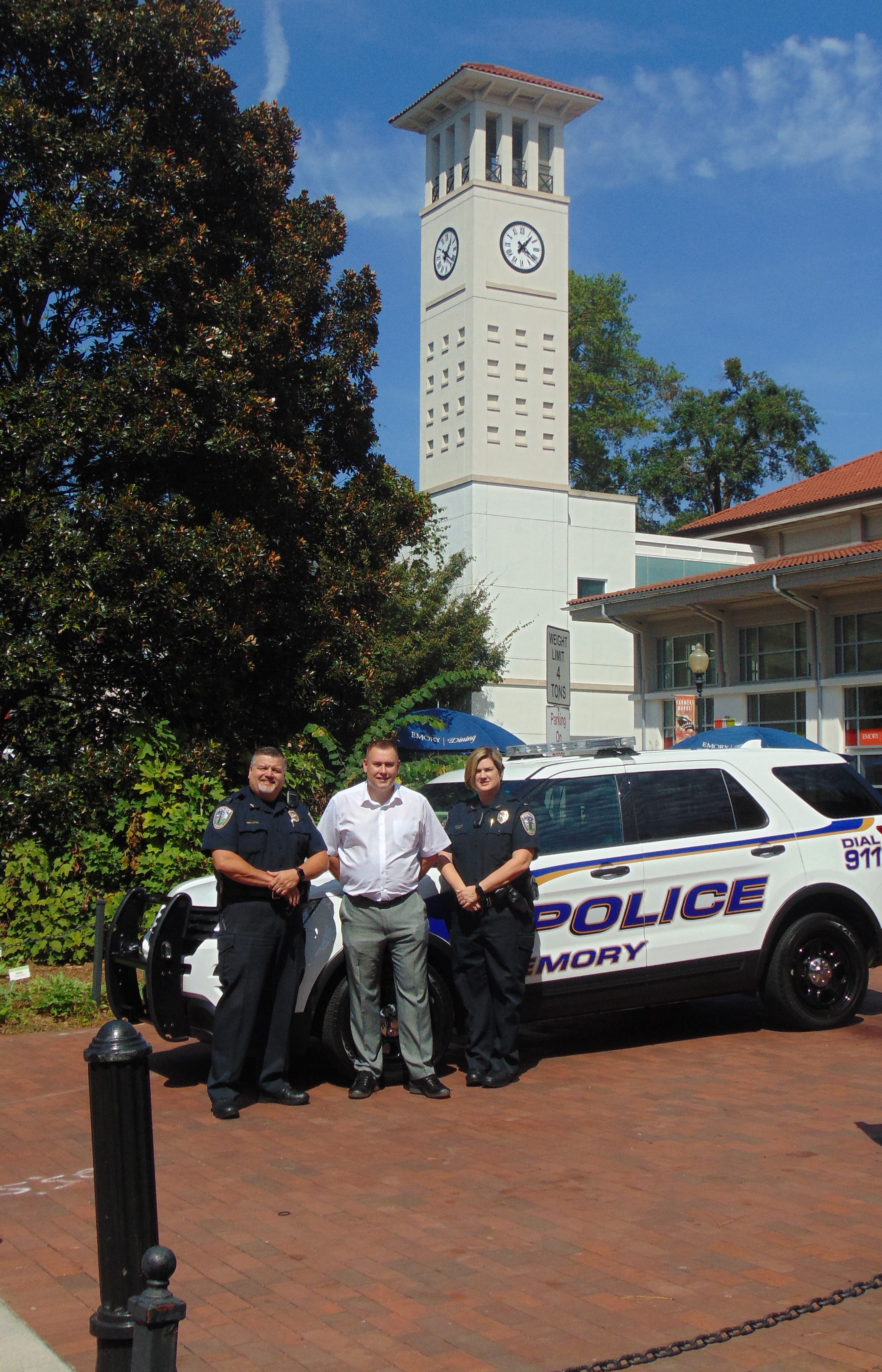 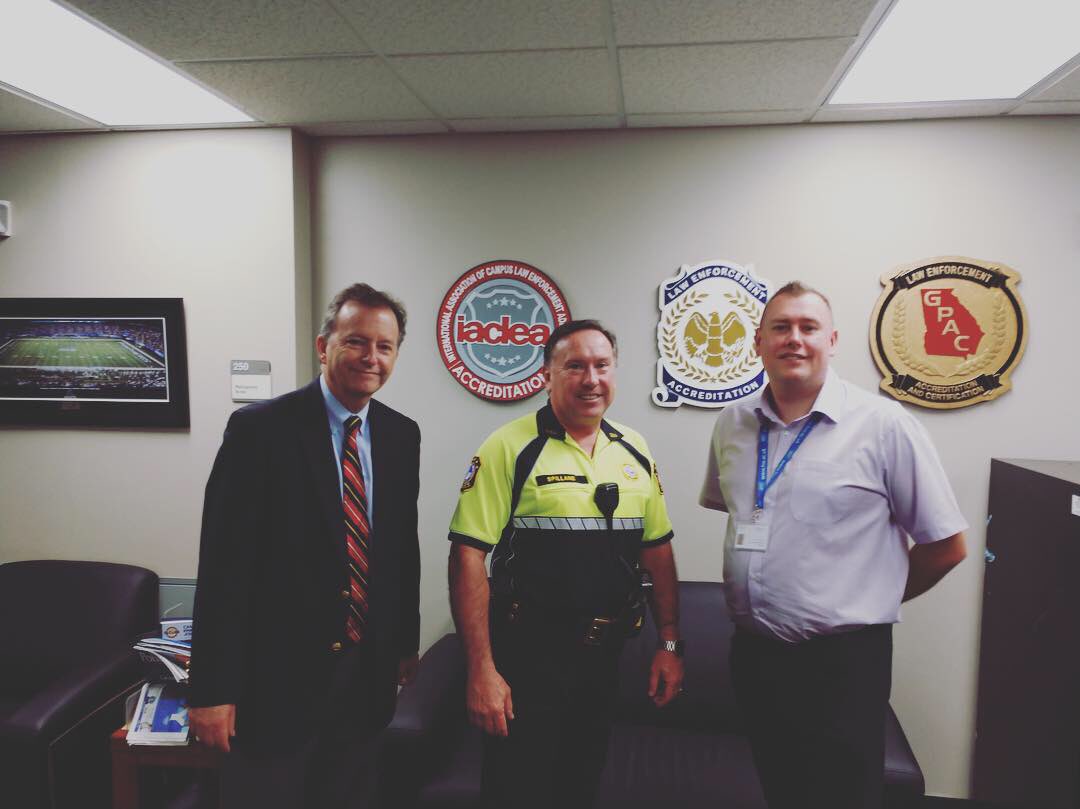 One month later, it was my turn to visit Edinburgh, Scotland. Ross had planned an exciting itinerary that included a tour of the Heriot-Watt campus and the Safeguarding Services operations, as well as a visit to the University of Dundee and a tour of their Precinct Services. The highlight of my visit: an absolutely fantastic full-day trip to the Scottish Police College and headquarters for the Scottish national police force, known as Police Scotland. 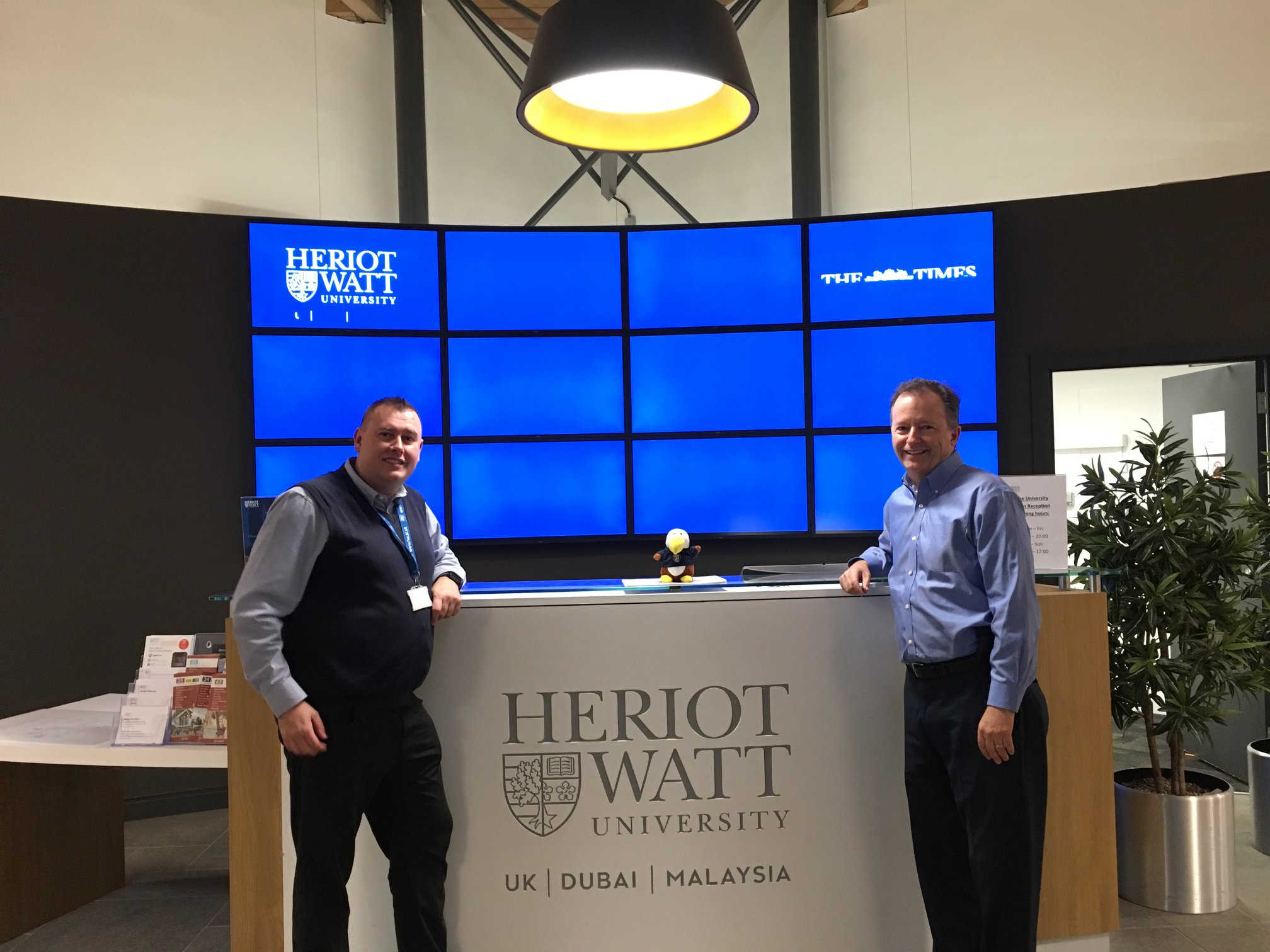 At Emory, I direct a staff of armed, sworn police officers who are accustomed to encounters with a public who might also be armed. On my visit to Heriot-Watt, I learned the universities in Scotland do not have police departments. Instead, they utilize unarmed security staffs, with support from Police Scotland. The Police Scotland patrol officers are also unarmed, with the exception of armed response units. Currently, of the 17,000 officers, Police Scotland employs, only 275 are armed.

Both of our agencies have frequent contact with local public safety departments, including police, fire, and emergency medical, to support the needs of the campus communities.  Both campuses include emergency management components that plan and drill with the appropriate responding support groups.

Like Emory, Heriot-Watt has highly selective recruitment standards and processes in place to ensure that an articulate, well-trained, and emotionally intelligent officer is patrolling the campus and responding to calls for service.  Also like Emory, Heriot-Watt invests heavily in the development of supervisors and managers to become future campus safety leaders in the field, on their campuses, and beyond.

Both agencies provide community relations programming to include safety classes, tabletop exercises, and presentations.  The programming involves frequent collaborations with local agencies to address on- and off-campus concerns.

Geographically, both Heriot-Watt and Emory have main campuses located in urban, metropolitan environments, with traditional campus layouts. Each has open access to the public and the departments deal with the challenges that represents.

Heriot-Watt has five campus locations. The main campus is in Edinburgh, with two satellite locations in the Borders and Orkney (both in southern Scotland). Additionally, Heriot-Watt maintains campuses abroad in Dubai (United Arab Emirates) and Malaysia. Emory has three campuses: a main campus in east Atlanta and satellites in downtown Atlanta and the city of Oxford, located about 30 miles east of metro Atlanta.

Each institution has students, employees, and visitors moving around campus on foot, bike, car or via university/city buses. Emory PD does not have responsibility for the parking function, but Heriot-Watt Safeguarding Services does experience the joys of managing parking spaces and the related enforcement.

The staff at Heriot-Watt share challenges similar to those of Emory related to student mental health, alcohol, and drug abuse. With a drinking age of 18 in Scotland, alcohol usage is more prevalent in their environment. However, drug usage, especially that of marijuana, is significantly lower than at Emory. 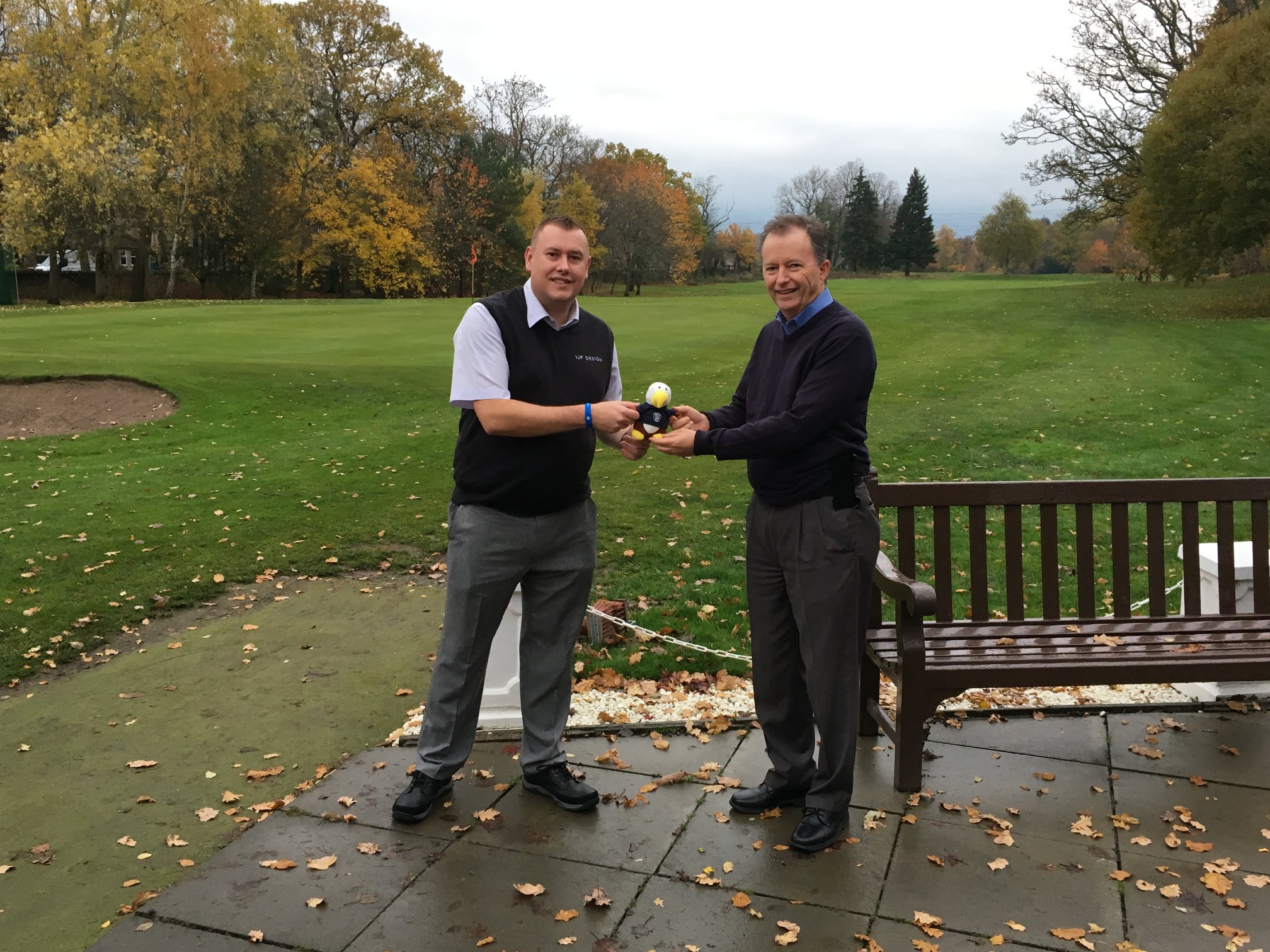 Looks like Baby Swoop wants to hit the links on one of Scotland’s very green and famous golf courses.

Heriot-Watt maximizes the utilization of security technology in the deployment of their security officers. With a state-of-the-art control room, their managers can direct the response to calls-for-service with an intuitive user interface that allows for immediate prioritization for critical alerts, creates a better understanding of the context of the incident, and, ultimately, serves to improve productivity and capabilities.  By using GPS technology in department-issued cell phones that track officers on a central video screen in the control room, calls are automatically dispatched to the closest responding unit. Their student safety phone app is integrated into the control room, and student emergency alerts can be monitored in real time on the main dispatch screen and coordinated with respective video from surveillance cameras in the area. A project is underway to integrate drone-generated video into the technology response platform.

Emory has an emergency communications center, similar to a small 911 call unit, in which dispatchers answer and record calls for service. While there is access to campus-wide surveillance cameras and a similar phone app for students, the lack of system integration makes the user interface operationally clumsy, compared with Heriot-Watt. While Emory is dependant on technical support from another university department, Heriot-Watt has made substantial investments in internal department staff to support their security technology. As a result, they employ IT professionals who have developed a specialty in their agency’s security systems, rather than IT generalists who are challenged with re-learning software systems every time they are called upon for help.

Heriot-Watt Head of Security Mr. Les Allan has created a work environment centered on the idea of continued development. Whether referencing innovation in security technology and its use as a force multiplier or in the training of staff to take the next step in their professional journeys, development is discussed enthusiastically and often in the Heriot-Watt Safeguarding Services offices. In my interviews with staff, each seemed to be creatively curious and excited about their continued development.

Heriot-Watt draws new officers into project development to encourage input into the design and innovation of systems and operations. By allowing them the freedom to guide projects early on, leaders create an environment that fosters innovation. Managers are deliberately encouraged to shadow senior department leadership to observe collaboration with other university and external partners.

Emory has a more traditional police department structure, with ranks and clearly assigned duties and responsibilities. Although successful in addressing the community needs and primarily focused on calls for service, the Emory model is much less adaptive to the ever-improving world of security technology, as well as changing needs from our communities.

The day spent at the Police Scotland Headquarters and the Scottish Police College was absolutely fascinating. I’ve toured many police academies over my almost-40 years of service, but never have any been based in a castle! The senior detectives’ class on advanced sex crimes investigation provided insight into the high level of victim support the agency provides, in addition to external advocacy group support.

The conversations with police instructors on the significantly higher amount of verbal communications and defensive tactics taught in their academy process demonstrated how the training lays a substantial foundation for conflict resolution for officers who may only be armed with a baton.

Beyond the armed vs. unarmed and police vs. security, the core values and vision of the Heriot-Watt University Safeguarding Services Department and the Emory University Police Department are the same: working to keep our campus communities safe and secure!

The IACLEA/AUSCO International Exchange Program was a once-in-a-lifetime experience, and I encourage all of my fellow higher education security colleagues on both sides of the Atlantic to pursue aggressively the opportunity!