Created in 1968, VCU has emerged as one of the nation’s premier urban public research universities and is one of 28 public universities with an academic medical center. Located in the heart of Richmond, Virginia’s capital city, VCU enrolls more than 31,000 students in 217 degree and certificate programs, with approximately 6,500 living on campus. In 2017–2018, VCU and VCU Health employed 22,888 full‐time and part‐time employees. VCU owns and controls 253 buildings and 101 acres across two academic campuses.

VCU Chief of Police John Venuti, who is also the associate vice president of public safety for VCU and VCU Health, has been at the university for nine years, overseeing public safety, emergency management, parking, transportation, and fleet.  Chief Venuti previously served 26 years with the Richmond Police Department (RPD), retiring as a major in charge of the Support Services Division, which included the major crimes, special investigations, and special events units. 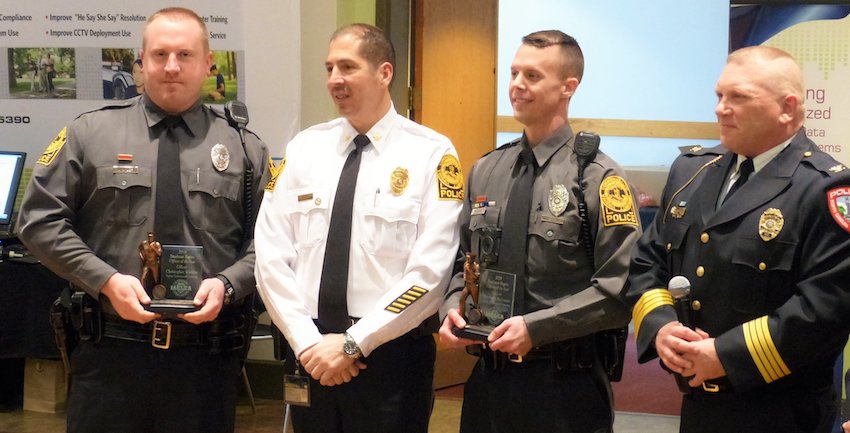 Under Chief Venuti’s leadership, VCUPD has embraced the use of data and technology to identify public safety challenges and reduce crime.  According to Chief Venuti, “We have been strategic about what we want to accomplish by identifying those things that will give us the biggest return on investment, which is to establish trust and confidence in the VCU community.” Throughout his tenure, Chief Venuti has emphasized three priorities for the agency:

Build and Sustain Partnerships and Collaboration

One of Chief Venuti’s first challenges was to change the perception that VCU was a dangerous campus. Infamous events from the past and urban myths colored the perceptions of the campus. But, with 35 reported robberies in the 2009–10 academic year, it was understandable that some expressed fear.

According to the chief, “When I first came here, I heard stories about people feeling unsafe, and so we spent eight months developing a perception-of-safety survey.  The survey showed that while most people did feel safe on the campuses, others didn’t. We were able to use the survey results to identify those things that made people feel unsafe, and then we created initiatives, often in collaboration with other campus departments and the city of Richmond. We relied upon CPTED (crime prevention through environmental design) principles to cut back trees and enhance lighting.  And we used high visibility patrols and other enforcement tactics.”

By the next academic year, robberies had been reduced significantly, and so far in the 2018-2019 academic year the number is 2. 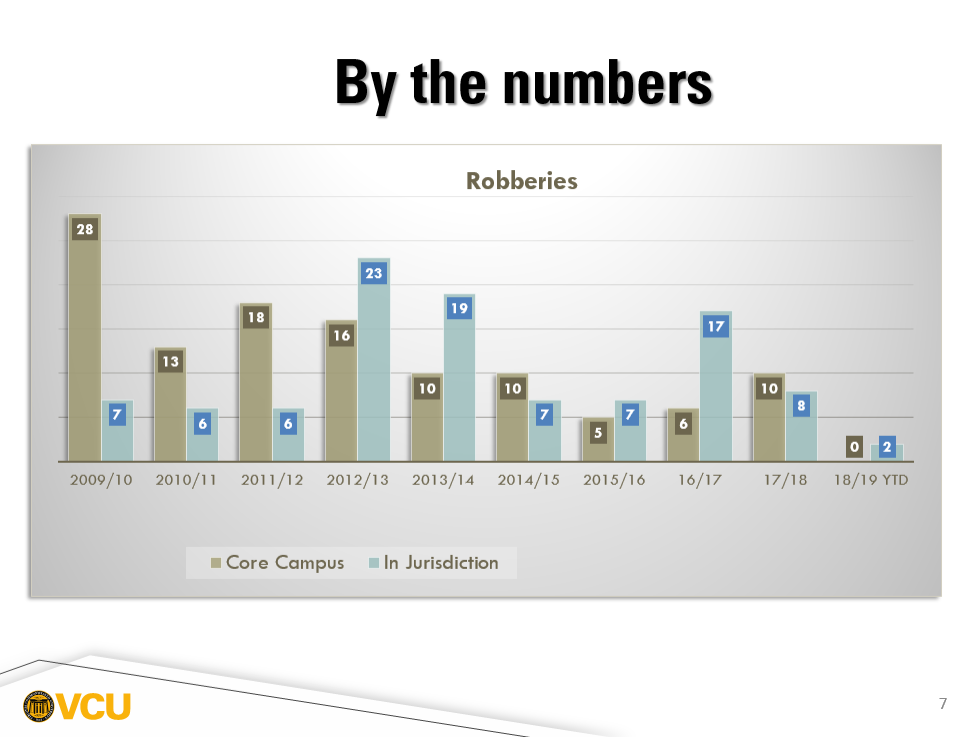 The emphasis on safety has continued, and in the Spring 2018 Perception of Safety Survey, 95.5% of the students, faculty, and staff surveyed reported feeling "safe" or "very safe" on VCU's campuses.

“Improving safety was a key outcome, but just as important is that we showed that our agency was responsive to the concerns of those who use the campus every day,” said Chief Venuti.

While with VCUPD, Chief Venuti has made sexual assault investigations and victim‐witness services a primary focus. In 2016, VCUPD became the first higher education police department to implement the “You Have Options” program, which is designed to give sexual assault survivors the opportunity to report to police in a way that’s most comfortable for them.

In 2017, VCUPD placed first and received the “Leadership in Victim Services Award” from the International Association of Chiefs of Police (IACP), for using innovation, best practices, and training to better their response to victims.

“In 2009 our video camera system was old and outdated.  The images were grainy or out of focus. Many of the cameras didn’t even have working video recorders. And, we didn’t know the location of all the cameras because they were under the control of Facilities,” said Chief Venuti.

In 2012 the agency began an initiative to upgrade all video surveillance on campus and continues to embrace emerging technology advances. VCU has established a pilot program with Cisco and SyCom to use digital video technology that offers advanced analytics, and requires less storage and infrastructure. In summer 2015, the IACP honored Chief Venuti and SyCom representatives with the Michael Shanahan Award for Excellence in Public/Private Cooperation.

“We now use cameras strategically, in a way that is consistent with my vision for campus public safety. They have become indispensable, capturing more than 2,300 incidents,” he said.

VCUPD has also implemented body-worn cameras for officers and stationary license plate reader (LPR) technology on the Monroe Park Campus to create a safer environment. It also has an around‐the-clock emergency communications center and more than 22,500 users on the LiveSafe mobile safety app.

The LPR technology was one component of the work for which VCUPD Assistant Chief Christopher Preuss earned IACLEA’s 2018 Award for Administrative Excellence. Assistant Chief Preuss secured more than $2 million in grant funding from Virginia’s Office of the Attorney General to create a regional firearms training facility. He oversaw the creation of a five-lane, indoor handgun range in the basement of VCUPD’s new headquarters. With approximately $550,000 remaining, Assistant Chief Preuss modified the proposal and sought Department of Justice approval to implement License Plate Reader (LPR) technology on campus. The system became fully functional in March 2018.

Each summer, at an annual reception during the parent/student orientation, parents directed many of the same questions to VCUPD staff about campus safety and security.  VCUPD staff decided “to seize the narrative,” according to Chief Venuti, and created the New Student Orientation Video that focuses on answering parents’ questions. Now, at the annual reception, with their questions answered, the conversations between parents and VCUPD staff are more relaxed. 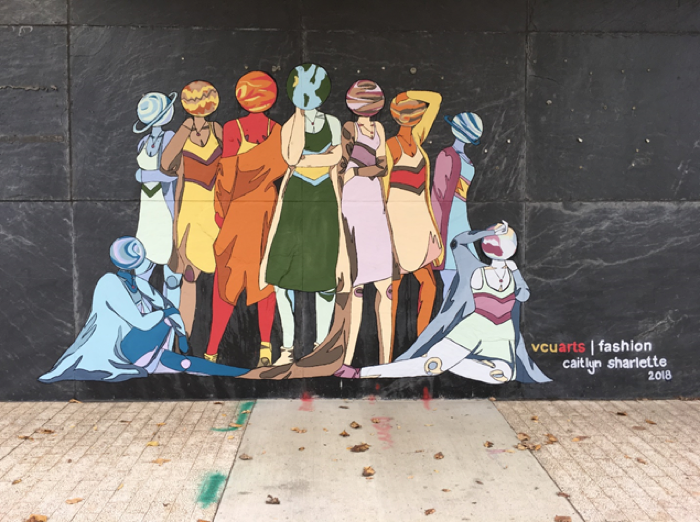 That type of creativity and innovation extends to VCUPD partnerships, such as the School of the Arts, whose students painted a mural on the side of the new police headquarters that “has brightened up our corner in downtown Richmond and really catches your eye,” said Chief Venuti. “We also work with students in the School of Journalism to provide them access to the agency when they work on different projects.”

“We try to work with everyone,” he said.  “When we opened the new headquarters, we entered into a partnership with the greater Richmond transgender community that was looking for a place to plant Richmond's transgender tree of remembrance.  We offered a spot on our property and hosted the November 20th Day of Remembrance ceremony.” And the agency doesn’t stop there in its efforts to build partnerships.  Officers have received awareness training for the transgender community, awareness training from LGBTQ Safe Zone training, and most recently received training from the Muslim Student Association.

“We have a lot of great people in the VCUPD that make things happen on a daily basis and are the reason for the successes we have had,” said Chief Venuti.

According to the chief, “VCU now has the reputation of being the safest part of Richmond.” Achieving this distinction didn’t happen overnight, but was part of a series of annual plans and hard work to advance Chief Venuti’s vision for the campus.