Congratulations to Chief Regina Lawson, Wake Forest University Police Department, for being selected IACLEA’s Southeast Region Police Chief of the Year at IACLEA’s Southeast Regional Conference, which was held at North Carolina State University. The recognition criteria states that it is presented to an IACLEA member who is a chief in the Southeast Region in good standing, has strong leadership skills demonstrated by a successful execution of higher rank position and authority, and someone with a strong devotion to campus law enforcement and the community they serve. The recipient has cultivated others to follow in the field of campus policing and is highly respected by their peers. 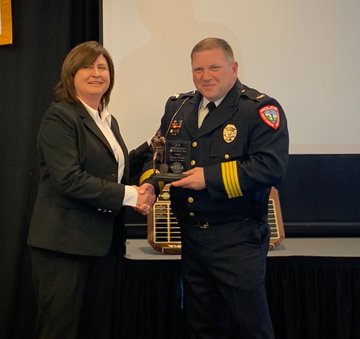 That sums up Chief Lawson! She has served as the chief of police at Wake Forest University (WFU) since 1992, starting as the assistant chief in 1989. Chief Lawson has been an active member of IACLEA for 20 years, during which time she served on the Board of Directors, as a conference host and co-host, and co-chair of the IACLEA Accreditation Commission and Membership Committee. She led the WFU Police Department to become the first agency to successfully complete IACLEA Accreditation in 2008.

When asked about the recognition, Chief Lawson said, “There is no higher honor than being recognized by your peers, and this means a lot to me. At the end of the day, I think that all of us would agree that it is all about keeping our campuses safe. That is what is really important.” Continued Lawson, “For those who are newer to IACLEA, I encourage you to get involved and lead where you are. You do not have to be a regional director. You can serve on committees or task forces, host trainings, webinars, and meetings, attend trainings, or volunteer to assist at conferences.”