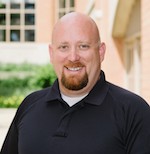 At the top of the list for program expansion at IACLEA is training. We hear that’s what members need and want. To facilitate the delivery of increased training, IACLEA has hired Josh Bronson as its first full- time director of training. His first day on the job was June 22—in Milwaukee at the Annual Conference. Bronson has been a campus police officer and a sexual assault investigator. He is highly trained in many facets of law enforcement and is also creative in building partnerships to maximize program effectiveness.

"I look forward to working within IACLEA and with all the wonderful campus public safety agencies in the United States and around the world," said Bronson. "It is an honor to work with such dedicated people."

Bronson remains an instructor for the International Association of Chiefs of Police (IACP) Violence Against Women Initiative, instructing on topics such as Title IX and trauma- informed sexual assault investigations.

His full-time job before IACLEA was assistant director of the Office of Civil Rights and Sexual Misconduct and the lead special investigator at the University of Maryland, College Park. In this role, he investigated all reports of sexual assault/ harassment, dating/domestic violence, and stalking.

He previously served as the assistant director of campus safety/deputy chief of campus police at McDaniel College in Westminster, Maryland. During his tenure at McDaniel he oversaw training, IT, investigations, special services, and crime prevention, along with other areas. He was also the Title IX investigator.

Bronson developed a training program on rape culture and trained a wide variety of audiences from law enforcement to high school students nationally. He has also instructed at the Maryland Police Training Commission Police Academy and the Maryland Department of Natural Resources Police Academy on sexual assault investigations for the initial responding officer. He is a graduate of the IACP National Law Enforcement First-Line Supervisor Training on Violence Against Women, and has attended numerous trainings in the area of gender- based violence. Bronson has also attended training through the FBI, Northeast and Midwest Counterdrug Training Centers, and the Howard County Police in the area of investigations and interview and interrogation. Bronson, until recently, was a member of the Board of Trustees at Rape Crisis Intervention Service (RCIS) of Carroll County, Maryland, and is still an active volunteer with RCIS.