"I want to congratulate both departments," Luedtke said, "for accomplishing a challenging, yet rewarding, undertaking. IACLEA Accreditation allows our members to benchmark professional best practices, developed and reviewed by their campus public safety colleagues, assuring themselves and their constituents of sound and consistent service."

Lehigh University, located in Bethlehem, Pennsylvania, offers a rigorous academic community for nearly 7,000 students. The Lehigh University Police Department consists of a chief, an assistant chief, two lieutenants, two sergeants, three corporals, 18 patrol officers, four security guards, six dispatchers (including part-time), a business manager, and 25 part-time events staff. The agency occupies a modern, well-equipped building on the edge of the campus, while community police officers work out of a police substation located in a more commercial and active Farrington Square complex. Trained and certified through the authority of the Commonwealth of Pennsylvania, Lehigh University police officers have full police powers on campus.

Chief Ed Shupp leads the Lehigh University Police Department, one of the few university police departments accredited by the Pennsylvania Chiefs of Police Association. Achieving that distinction in 2007, the agency has been reaccredited through the Pennsylvania Law Enforcement Accreditation Program twice. During their last review, Chief Shupp was recognized by the Pennsylvania Law Enforcement Accreditation Commission for maintaining a "model university police agency" that is "well- organized, trained, disciplined and effective." Chief Shupp has served on the force for 38 years, joining it in 1979 as a patrolman and rising through the ranks. He was named chief of the department on May 1, 2000, after serving as interim chief for 10 months and second-in- command for more than a decade.

The agency was also recently lauded by the institution’s president, who commended their level of dedication and service. On May 9, the university issued a news release for National Police Week. Acknowledging the dedication of the members of the campus police department, President John Simon thanked Chief Shupp and the members of the agency for their role in ensuring student safety.

When Simon meets with parents, he said, "I know what item will be at the top of their list of concerns: safety. I assure them that nothing is more important to us at Lehigh than the well-being of each and every one of the young women and men entrusted to our care. And I pledge that we will continue to do everything in our power to keep their sons and daughters safe." Simon said that he is able to make that pledge with full confidence, in large part, due to the outstanding work of the police department. 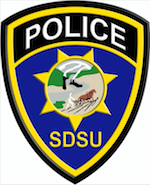 South Dakota State University (SDSU), located in Brookings, South Dakota, was founded in 1881 as a Morrill Act land-grant institution. With an enrollment topping 12,500 students, the campus encompasses more than 261 acres. Timothy A. Heaton has served as the chief of the SDSU Police Department since October 1997, after having served as a patrol officer and investigator for the department for two years. Prior to working for the SDSU Police Department, Chief Heaton was employed by the U.S. State Department and assigned to diplomatic security; he was a Military Police Officer during his U.S. Army enlistment.

When Chief Heaton was appointed to lead the department, he was determined to accomplish a significant paradigm shift from a reactive to a proactive methodology. In 1997, the department employed five patrol officers. In spite of the fact that the officers were sworn and certified, law enforcement was secondary to physical plant and security issues, including locking and unlocking buildings, responding to low-temperature alarms, and enforcing parking violations.

Chief Heaton set out to professionalize the department and expand services. He began to recruit officers with prior law enforcement or corrections experience. In 1999, he had a new policy manual written and developed a field training program. He also began to aggressively lobby for additional resources. A dispatch position was converted to a police officer position, salaries were increased, another patrol car was added, the department computer systems were upgraded, and SDSUPD began having in-service training and squad meetings.

By 2000, the department had nine full-time, sworn and certified officers, to include the chief and an assistant chief. There were three marked patrol cars, which featured modern radar units, audio recording systems, and safety barriers. Training became a priority and officers were receiving 40-80 hours of advanced training per year. Chief Heaton made it clear that he wanted certified instructors on staff, and officers were sent to schools to become certified instructors in advanced DUI, drug interdiction, firearms, ASP batons, ethics, domestic violence, threat response, crowd management, and other topics. In 2001, the policy manual was again updated, as were training programs and community policing services. In 2014, the agency became the first department in the area to issue body cameras and began the process of working toward IACLEA Accreditation.

Each accredited department voluntarily elected to implement policies and procedures to comply with more than 200 applicable standards. They compiled documentation confirming their compliance and underwent a comprehensive evaluation by a team of independent assessors. Their IACLEA Accreditation is awarded for a four-year period. Each department is required to submit annual reports attesting to its continuing compliance with the standards.