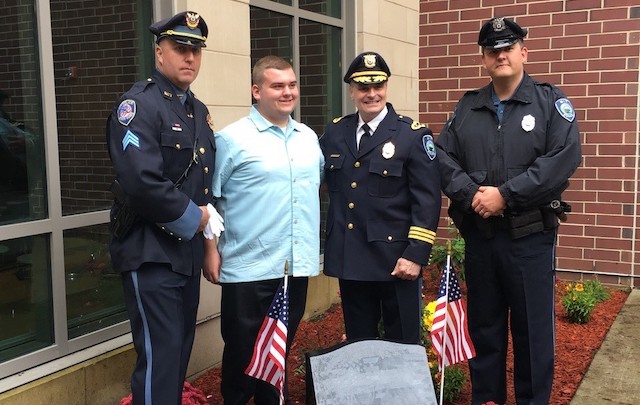 Officers from the Wilmington (Massachusetts) and Massachusetts Institute of Technology (MIT) Police Departments participated in the dedication of a memorial to MIT Officer Sean Collier on October 12. The memorial was placed in the courtyard of Wilmington High School (WHS), from which Collier was a 2004 graduate. WHS alum Joseph Wilson carried out the initiative to commemorate Collier as his senior project.

So that future generations remember Collier and the Boston Marathon bombing, Joseph initiated a GoFundMe campaign that raised more than $6,000, which more than covered the cost of the gorgeous memorial headstone that Joseph designed. He obtained a city permit and permission from WHS to install the marker. His fundraising campaign was so successful that he was able to make a contribution to the scholarship fund that Collier’s parents set up in his memory.

A touching connection: one of the contributors to this initiative was the foundation established to honor fallen Wayne State University Officer Collin Rose, who paid tribute at Collier’s memorial service before Rose, himself, was murdered in the line of duty in 2016. Both MIT and Wayne State are IACLEA member institutions.

Collier was murdered by the Boston Marathon bombers, while he was on duty and part of the manhunt to apprehend them in 2013. IACLEA is leading efforts to pass federal legislation in his honor that would provide federal death benefits to survivors of fallen officers serving at private institutions of higher education.