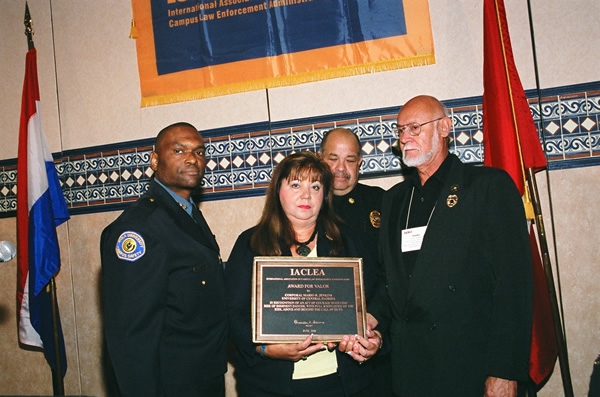 Officer Mario Jenkins was killed in the line of duty on September 24, 2005, while completing a lawful arrest. Officer Jenkins was performing plain-clothed law enforcement duties, while participating in “Operation KnightWatch” at the Orlando Citrus Bowl, the home field for the University of Central Florida football team.

A four-year member of the University of Central Florida Police Department, Officer Jenkins had also served as a municipal officer with the City of Clermont, FL. He was a member of the UCFPD Emergency Response Team and was being trained as the department’s sniper. He was a narcotics K-9 handler for the department as well as a Crisis Intervention Team Member. He was also a Range Firearms Instructor.

He was a proud member of the United States Marine Corps, where he served six years as a Marine Reserve.

Officer Jenkins was posthumously promoted to the honorary rank of Corporal on October 1, 2005, for his unselfish and dedicated fulfillment of his law enforcement duties that led to his death. No greater sacrifice can be made by a law enforcement officer than the full measure given by Corporal Mario Jenkins.

During the Ceremony, a four-minute video prepared by the University of Central Florida in honor of Officer Jenkins’ life and accomplishments was played for the Conference delegates.