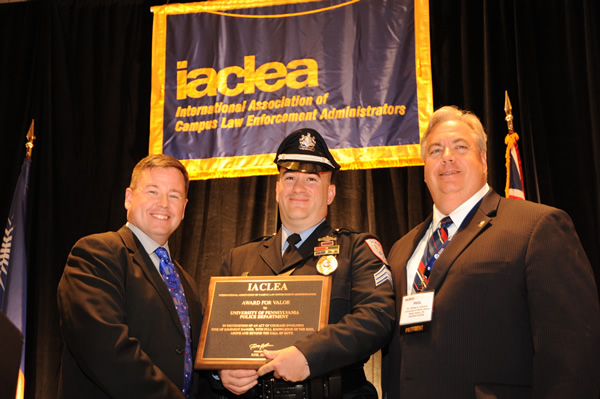 On Sunday, November 21, 2010, at 2:45 a.m., a 51-year-old woman was 'car jacked' of her 2000 Cadillac by two young males, both armed with handguns. The males pulled her from her vehicle and drive away, leaving her on a street in west Philadelphia, about 20 blocks from the University of Pennsylvania campus. About 15 minutes later, a vehicle matching the description of the same gray Cadllac was observed by police and civilian CCTV operations in the PennComm Center, Penn's radio operations room, traveling at a high rate of speed on Locust Street, only two blocks from Penn's campus. The information was being tramsmitted over police radio and the vehicle's progress was followed by both police officers and CCTV operators, when it was observed striking a bollard at 40th and Locust Street; the bollard was one of several that closes Penn's main pedestriam artery, Locust Walk, from vehicular traffic. The driver and the passenger exited from the vehicle and fled on foot onto Penn's campus. The driver of the stolen vehicle ran in a northeast direction, discarding a five-shot .38 caliber handgun with three rounds. Less than a block away, the male was stopped by police and subsequently identified as one of the car jackers. Coincidentally, the passenger of the crashed vehicle ran in the same northeast direction, but turned east and ran by a volleyball court and into an open, grassy area between two student dormitories on the Penn campus. In that grassy area, adjacent to an extrance into one of the low rise College houses, the male was confronted by University of Pennslvania police officers who responded to the College house to prevent unauthorized entry by an armed suspect. Near the entrance door to the dormitory, the police officers and suspect traded gunfire. The male turned and ran south alongside a high-rise College house towards Locust Walk and continued firing at the responding police officers. The suspect turned west around the high-rise building and was now running back towards the crashed vehicle. As the suspect continued running west on Locust Walk, he was chased by the police officers he fired upon at the low-rise dormitory, and then ran towards two other responding University of Pennsylvania police officers approaching from the area of 40th Street. Mid-block on the 3900 block of Locust Walk, while students out for the night were finding their way back to their on-campus houses, the suspect again engaged responding police officers in gunfire.

While placing themselves in harm's way, the police officers cleared the walkway of pedestrians and engaged the male, trading gunfire. The male was observed on CCTV pointing his weapon directly at responding police officers from a standing position, and again from a sitting position on the ground. The suspect sustained several gunshot wounds and subsequently succumbed to his injuries in the hospital. A .38 caliber handgun with fully spent rounds was recovered from the suspect at the scene of the shooting.

Moments after trading gunfire with the suspect, several of the involved police officers performed first aid while awaiting the arrival of the Philadelphia Fire Department personnel. Prior to transportation to the hospital, the female complainant positively identified the male suspect as being involved in the armed car jacking.

Due to the professional actions of the responding police officers, and their willingness to place themselves between the armed suspect and Penn students walking on campus, there were no injuries to either police or Penn students. Nominated by Mark J. Dorsey, Chief of Police.